Huge thanks to everyone who hamstered with us!

Did you know? In German to hoard or forage literally means to hamster. You have given the hamster a voice and have now become a hamster protector! In just one month we were able to collect 5,040 euros for the film “The Last Common Hamsters“. Thanks to each and everyone who supported the last european hamsters!

The film project “The Last Common Hamsters” was one of the 30 selected projects for Jena, which the public utility company Jena Pößneck sponsored as part of their anniversary.

What is the project about?

Support wildlife protection, sustainability and environmental education with the film project “The Last Common Hamsters”. The film is intended to inspire enthusiasm for the European hamster and move people with the fate of the critically endangered species. The project is a cooperation between NABU Jena and the nature filmmaker and ecologist David Cebulla. It aims to raise public awareness for nature and species conservation. The educational work goes beyond the concrete situation of the field hamster. As a species with high reproductive potential, which is nevertheless on the verge of extinction, the study of the European hamster offers a critical approach to the question of the state of agriculture and the loss of biodiversity. The film shows the critical effects of intensified agriculture on European hamsters and explains why protecting European hamsters also contributes to the protection of biological diversity. We can only value and protect what we know!

How will the crowdfunding be used?

I’m David and I’m conducting the project that I’ve been preparing for over a year. As a nature filmmaker, I not only need patience, but a lot of tenacity. For a few seconds of footage of the common hamster, I sometimes lie in front of a burrow for days – in the heat and drizzle until I get the right shot. The crowdfunding enables the production of this year’s shooting block. I would also like to film the even rarer black common hamster, which probably only exists in Thuringia. The project is also supported by lottery funds from the Thuringian Ministry for Environment, funds from NABU Jena e.V. and my own funds. In addition to the shots in Germany, further recordings in Kazakhstan and Ukraine are planned for next year. The film will be released 2023.

What is the film about?

The nature filmmaker and ecologist David Cebulla is looking for the last European hamsters of our time. He wants to learn more about their way of life and show why the species is thretened by extinction. David pursues ambitious goals and pushes personal and technical limits. His path leads from the frightening collapse of the common hamster population in Germany and the original habitat of the steppe hamster in Kazakhstan to rural Poland. In addition to impressive pictures of the European hamster’s day and night activities, David wants to take new types of pictures of free-living animals inside a natural burrow. So he deliberately avoids studio recordings. The film will educate and move at the same time. The effects of modern agriculture threaten many species. How we shape agriculture in the future will decide more than the fate of the last European hamsters.

Share now as story and status or enjoy a new screen saver : 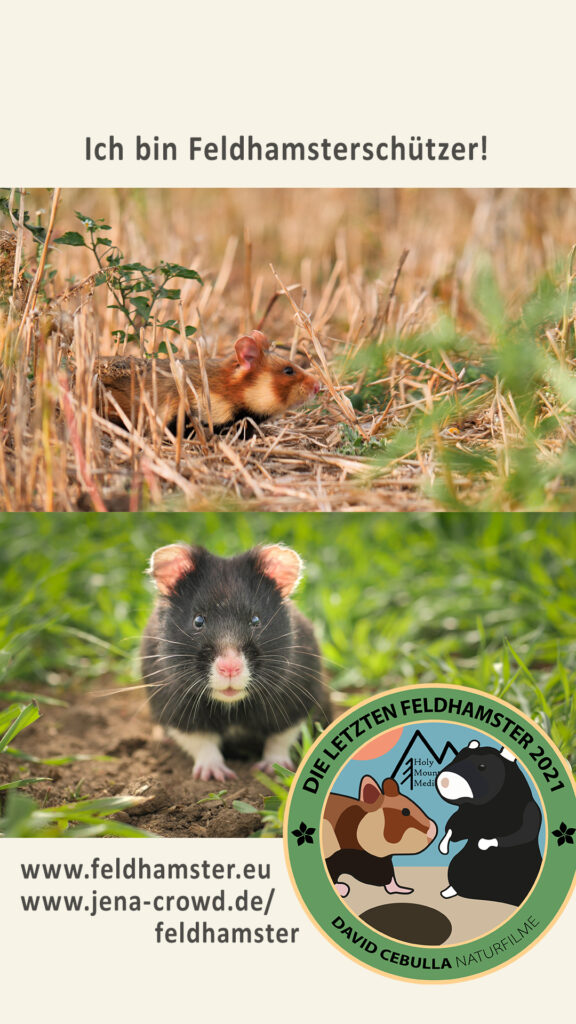 Liked it? Take a second to support dc@holymountains.de on Patreon!